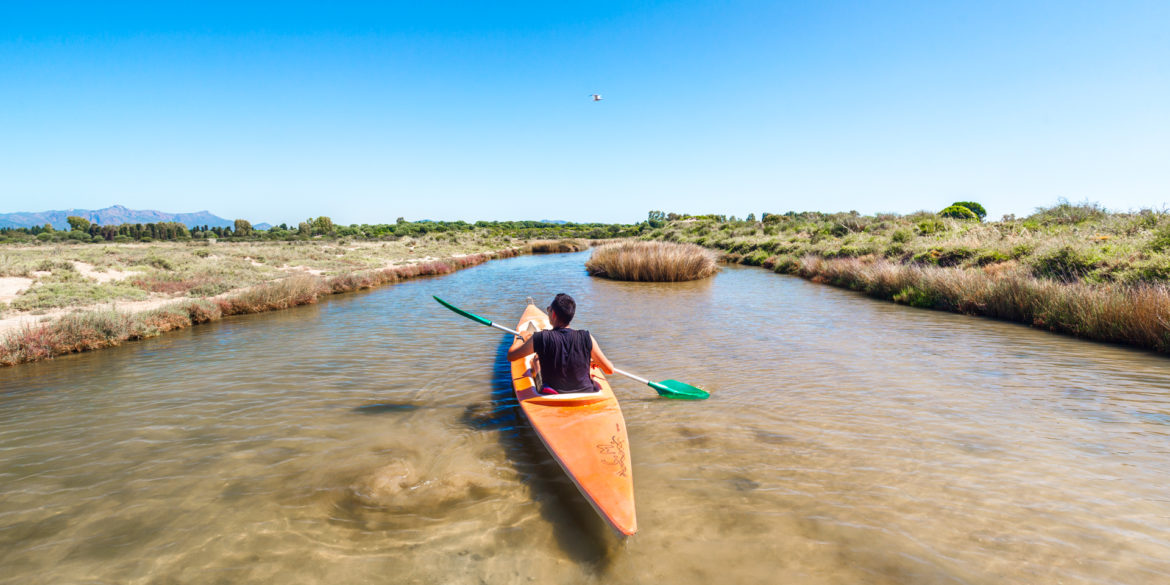 Excursions through the woods, around the lagoon by canoe, the ancient military posts

The tour of the coastal towers, the exploration of the wetlands of the lagoon of Nora, the excursions in the extraordinary woods of Is Cannoneris and Pixina Manna, the anti-ship military posts of the Second World War. There only is too much to choose from the possible itineraries which the area of Pula offers to hikers and nature enthusiasts generally.

The woods of Is Cannoneris and Piscina Manna

A fantastic day immersed in the wild countryside is what you can expect on the special trails for excursions which pass through the luxuriant woods of Is Cannoneris and Piscina Manna. It regards two gems in the natural reserve of the Sulcis region which lie partially in the territory of Pula. The forest of Is Cannoneris, considered a true paradise for hikers, with well-marked trails, crossed by numerous creeks and streams, and it comprises a protected natural oasis: the Sardinian deer lives here, as well as the fox, fallow deer and the golden eagle. The vegetation is extremely dense and includes one of the vastest cork oak woods of Europe.

The gorges of Calamixi are one of the wildest and most spectacular spots, hewn from the rocks by the incessant work of a stream, creating a canyon made up of steep granite walls. The forest of Piscina Manna (or Pixinamanna) is almost as vast as that of Is Cannoneris to which it is linked. These woods, too, offer interesting possibilities for excursions, surrounded by cork oaks, wild olive trees, juniper, and oleander. The birds that live here include the buzzard, peregrine falcon, and the Sardinian partridge.

Tour of the coastal towers

The coastal towers of San Macario, Coltellazzo and Cala d’Ostia comprise the defense system prepared by the Spaniards in the 16th century to counter the constant incursions at the hands of the pirates. For this reason, they are positioned in strategic locations to guarantee, as regards the first two, the security of the waters of the bay of Nora and, as regards the third, that of the coastline between Santa Margherita and Pula.

The Torre di San Macario is located on the tiny island with the same name, 400 yards off the coast. Like the Torre del Coltellazzo which overlooks the promontory of Capo di Pula and the ruins of the ancient archaeological site of Nora, it was built by the Spaniards in the 16th century. The Torre di Cala d’Ostia, on the other hand, was the creation of the Piedmontese, taking the place of a pre-existing watchtower of Spanish make in the 18th century. The towers are positioned in a stunning natural scenery, with the breathtaking beaches of Pula behind you.

A stroll along the pools and lagoons of the wetlands

The lagoon of Nora is an authentic natural gem of the area of Pula. The presence of numerous bird species, including the rare Corsican gull, render this area particularly commendable for those who like to go birdwatching.

The zone also is the point of departure for splendid excursions, on foot or by bike, among the pools, lagoons, islets, and channels on the sides of which the Mediterranean flora exudes its alluring scents. As it is for the renting of a canoe to head off on fun explorations of the calm waters of the lagoon, sliding along the bass, eels, white bream, sea bream, and mullet that live there.

Visit of the military posts of the Second World War

Along the slopes of the hill of Santa Vittoria, after having pursued the trails of the countryside, in the midst of the typical Mediterranean shrubbery, you will be able to spot the turrets and military structures camouflaged by vegetation. These are the defensive positions installed during the Second World War against the enemy’s navy, as a part of the defensive system for the Gulf of Cagliari. Among these, the Battery of Boggio has been recently restored and rendered accessible to visitors. From up here, one can control the entire plane below, right up to the coast.